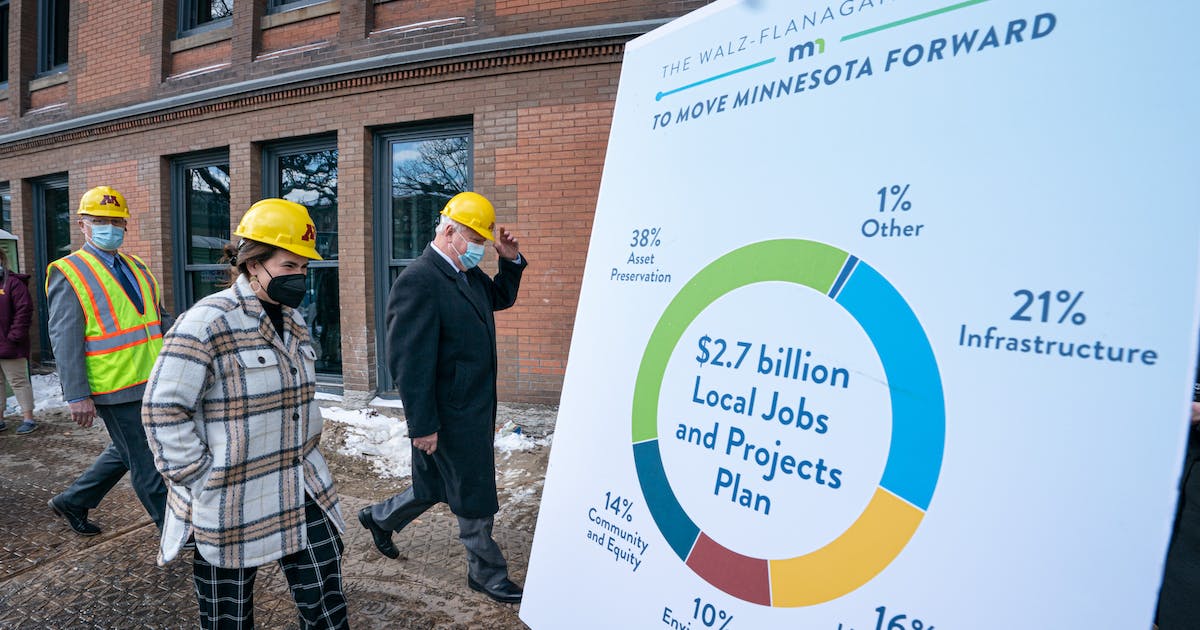 Governor Tim Walz on Tuesday outlined a $2.7 billion construction funding plan that he says will help reduce the backlog of maintenance needs across the state while preparing Minnesota for the future .

“It’s creating jobs in the skilled trades for a decade to come, and it’s tackling those issues, whether it’s aging infrastructure or resilience” to fight climate change, Walz said in unveiling his plan at the University of Minnesota.

Tuesday’s publication kicks off the debate on Capitol Hill, where lawmakers will battle over the scale of borrowing and construction spending with House Republicans reject the size of Walz’s proposal. Leaders will also consider how to leverage funds from the federal infrastructure program signed into law in November.

Minnesota expects to get about $6.8 billion from the federal government, but Walz said they are still awaiting information on exactly how much the state needs to put forward to meet matching fund requirements. “We can’t leave a penny on the table,” he said.

Debate over what should be included in the so-called bond bill, which uses government-guaranteed bonds to pay for investment projects as well as a variety of other sources of funding, typically drags on. until the last hours of the legislative session or takes a special session to resolve.

Minnesota leaders could also rely on a projected historic budget surplus of $7.7 billion to pay for some construction projects.

Walz’s Tuesday offer includes a mix of cash and debt. The proposal would use $2 billion in state-guaranteed general bonds and more than $200 million in cash, Minnesota Management and Budget Commissioner Jim Schowalter said, along with a variety of other bonds. and funding sources.

“This recommendation is fiscally responsible,” Schowalter said, noting that nearly 40% of the package will go towards ongoing building and facility maintenance needs. He and Walz said spending money on these needs now, before they deteriorate further and interest rates stay low, will save Minnesota money in the long run.

The governor made his pitch outside a construction site at the University of Minnesota, where workers are renovating the Child Development Institute. The U received state dollars from the 2020 bond bill for the project.

The $213.8 million included in Walz’s plan for the University of Minnesota system is a down payment to address a 10-year backlog of nearly $5.1 billion in deferred maintenance, the agency said. U President Joan Gabel at the event.

“It supports our students, the way we do research and discovery, and our ability to impact as an institution,” Gabel said.

The governor’s proposal also includes about $261.3 million for the Minnesota state system.

It remains to be seen which projects will be successful, and local demands often end up being used as bargaining chips to reach a final agreement on infrastructure.

While stark differences in state leaders’ visions for the bail bill are already apparent, lawmakers have expressed optimism that a deal can be reached despite election-year politics.

The political context of this year’s debate is similar to that of 2020, when all 201 legislative seats were up for grabs. Nonetheless, lawmakers and Walz were able to pass a $1.9 billion construction funding package that year, the largest in state history.

Senator Tom Bakk, an independent who chairs the Senate Capital Investments Committee, said last week that he would be surprised if this year’s bill exceeded the amount of the 2020 package.

“It’s probably going to be the most significant legislation passed this session,” Bakk said, adding, “There’s a lot of need. But you come back to the Capitol and the bills get smaller than the liaison presidents want. .”

Walz’s proposal is “much bigger than we ever have,” Bakk said Tuesday, as he traveled on the latest Senate tour to vet more infrastructure project applications. He stressed that a bail bill should relate to public infrastructure and said his priorities were deferred maintenance and preservation of state assets, as well as public safety projects.

Federal law provides significant funding for sewage treatment and transportation infrastructure, Hortman said, and lawmakers would want to provide some quid pro quo to raise as much federal money as possible. They should also look at areas not included in the federal package, such as the maintenance and rehabilitation of university buildings as well as other state assets, she said.

“In the communities of Minnesota, there are there is an immense need for investment in local projects and resources that create jobs and opportunity in the region, especially when it comes to investing in marginalized Minnesotans and solving our state’s housing crisis . The recommendations put forward by the governor do just that,” Lee said in a statement Tuesday.

The Walz plan includes more than $450 million for housing projects, including $70 million for veterans’ homes. Another $940 million is being directed to projects that the Walz administration says will help the state prevent or adapt to climate change, or mitigate its impacts. There is also money from the general state fund to help nonprofit organizations.

Walz and Lt. Governor Peggy Flanagan have visited various nonprofits with infrastructure needs over the past few months, from V3 Sports, which aims to build a health and community center in north Minneapolis to the Ain Dah Center Yung in St. Paul which provides emergency shelter for Aboriginal children. Both projects received funding under the Walz plan.

The 2020 construction program included $30 million for projects that supported Black and Indigenous communities and communities of color. The Walz administration’s proposal this year bumps up to about $100 million for communities that Flanagan says have traditionally been left out of the capital investment process.

“Organizations that focus on Black, Indigenous, and color-led community organizations are included in our ties bill, and we think that’s a really good job,” Flanagan said.