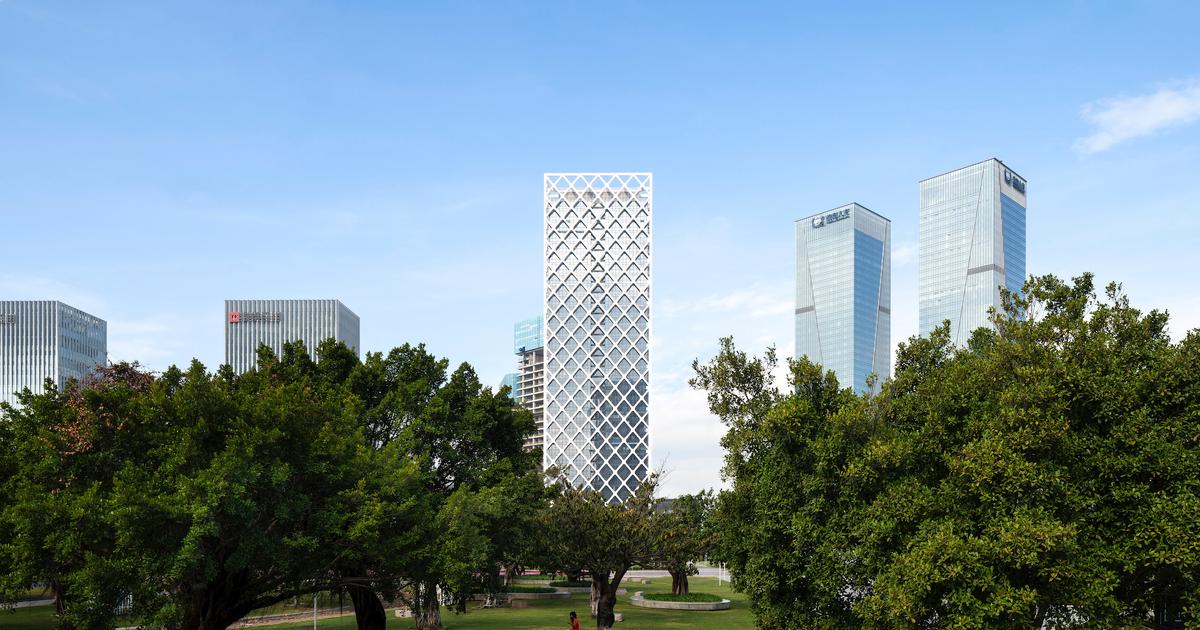 Described by architect Skidmore, Owings & Merrill (SOM) as a “breathable” building, the headquarters of the Rural Commercial Bank in Shenzhen, China, offers office workers an interior filled with fresh air and natural light. The tower is also defined by an eye-catching exterior, which is used to support and shade it.

The Rural Commercial Bank Headquarters was commissioned in 2012 and reaches a height of 158m (518ft) and also contains a much smaller adjacent building which is used for VIP guests. The exterior of the tower is an external box spring, which is similar to the exoskeleton seen on ZHA’s Morpheus Hotel, and the structural support it provides allows the interior to be columnless, while SOM claims that its shading effect reduces solar heat gain by about 34 percent. At the base of the building, the box spring widens at key points to frame views of a surrounding park and the nearby South China Sea.

The interior of the tower consists of 33 floors, most of which are devoted to offices, although there is also a hall informed by Feng shui and a roof terrace with sliding glass walls. The building’s fresh air comes from two large atria which extend its full height and act as its “lungs”. A system of automated window louvers and vents on each office floor draws air from the atria (which in turn have vents to the outside) when the weather permits. Pollution is an obvious concern with so much air coming in from outside, although Metropolis indicates that air quality levels are automatically monitored, and standard cooling is also available when needed.

â€œBy functioning as airways in a body and circulating fresh air throughout the building, these features generate significant savings in environmental and energy efficiency,â€ explains SOM. â€œThis system prioritizes the comfort and well-being of tenants to a degree generally unknown in office environments. Drawing inspiration from the principles of Feng Shui, in which water and wealth are intrinsically linked, the lobby is surrounded by a reflecting pool and features a wall of rippling water adjacent to the main entrance.[49-ft]- a high “rain curtain”, with water droplets cascading over small translucent filaments, lines the ultra transparent glass walls of the lobby. On hot summer days, these water features provide an evaporative cooling effect for the entire building. Above, pendant lights mimic rain droplets, and the lobby’s marble walls change from a textured finish to a softened finish to evoke the effect of water on stone. “

The project received the LEED Platinum green building standard for its energy efficient design and is also slated for Chinese green building certification.