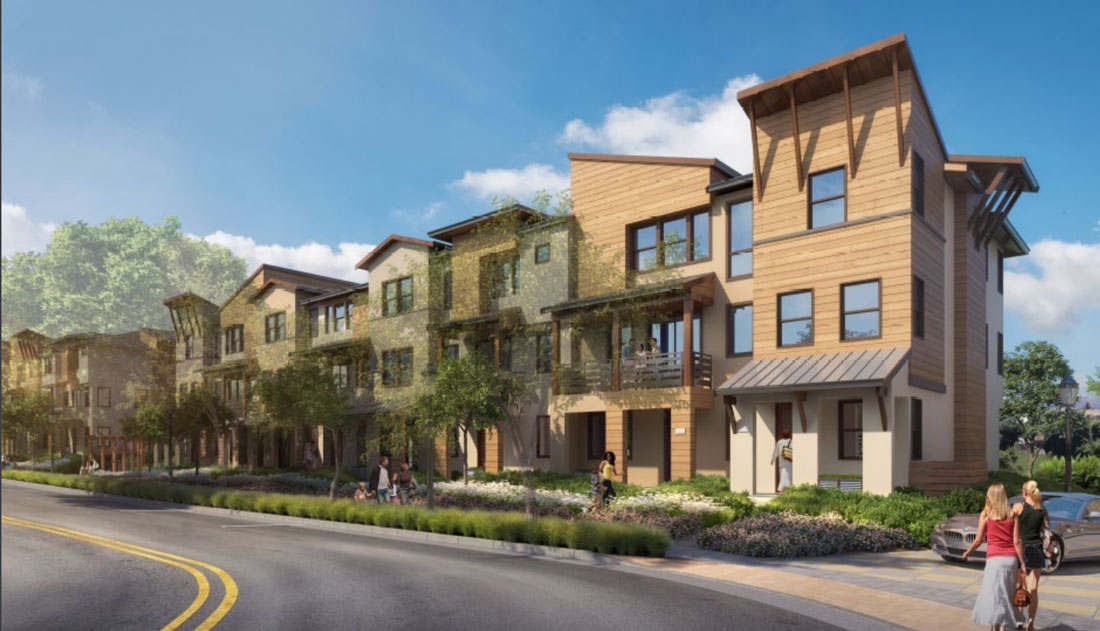 The developer of a downtown Morgan Hill residential project that will realign the oddly shaped intersection of Depot Street, Church Street and Dunne Avenue hopes to begin construction by the end of this year.

The project, proposed along Depot Street on the Hale Lumber site, includes 49 multi-family units and 3,000 square feet of office space on a 2.29-acre property. Latala Group, based in Morgan Hill, is the developer of the project.

A key component of the project is the realignment of Depot Street, which has been identified as a goal in town planning documents for over a decade. The project will reorient the south end of Depot Street with two slow, sharp curves through what is now the city’s Community & Cultural Center parking lot, and align Depot with Church Street at its existing intersection with Dunne Avenue.

“This project was designed with our community and our city center in mind,” Paul Latala of Latala Group told City Council on September 1. “Being from here, we care about the end result, and that’s what drove this project with staff and community input, to make it work for all sides.

A mixed-use project with a realignment of Depot Street was first proposed on the Hale Lumber site in 2017. In January 2019, the Latala Group acquired 49 housing lots through the residential development control system of the city and entered into a development agreement with the city.

But at the September 1 Morgan Hill city council meeting, council members were divided over whether the project should continue in its current form, as the city’s share of costs more than doubled.

The Latala Group has called for an increased contribution from the city due to the rising costs of materials and labor, as well as inflation, in recent years. The promoter also asked the city for an extension of its development agreement due to the Covid-19 pandemic and restrictions on work activities.

The board approved the requests 3-2, with board members Yvonne Martinez Beltran and Rene Spring dissenting.

Specifically, the city’s share in the project is now increased from $ 900,000 in 2019 to approximately $ 1.9 million. These costs, some in the form of credits to the developer, are related to the realignment of the public road as well as to the improvement of the intersection and the parking lot of the CCC.

Much of the increase is due to rising construction costs, but there are also additional expenses “previously not factored into initial cost estimates,” a report from city staff said. One of them is the need for a further environmental review of the project, which was not expected in 2019.

Spring was against Project Latala when it was first proposed years ago, largely because he believes the Depot Street hijacking is unnecessary and ill-conceived. The city’s growing share of costs solidified its “no” vote at the September 1 council meeting.

“Now they come back and ask for another (around) $ 1 million?” I find that outrageous, ”Spring said. “There is no way we can invest more in this ill-conceived street realignment project. “

He added that he had no problem with the design or density of the residential and office portion of the project.

But the majority of council members believe the repository realignment is well designed and that the project will bring significant improvements to the city’s downtown core.

“It’s unfortunate that more money has to be spent, but the benefits we get from this project, I think, outweigh the cost,” said Mayor Rich Constantine. “We are getting a realignment of the road which is part of our general (long term) plan, which we have to do” to improve traffic and safety.

City staff said the project will not result in any loss of parking for the CCC. All parking spaces for future residents and guests of the Latala Project will be located in the residential / office portion of the development, on the east side of Depot Street.

The 3,000 square foot office component will be purchased by the city. This space will be used as a non-profit service center, according to city staff.

On September 1, the council also agreed to a cost-sharing agreement with Latala to place utilities underground in the project area. The total estimated cost of landfilling utilities is $ 138,000.

City officials have long identified the Hale Lumber property as a key site for the future development of residential and complementary uses to complement the modern view of downtown Morgan Hill.

The lumber yard has been at its current Depot Street location since 1945, according to Hale Lumber owner Bob Hammond. Hammond’s father, Joseph Hammond Sr., bought the company in 1960, and Bob has worked there ever since.

“I think it’s a much-needed change for the city to realign Depot Street,” Hammond said of the Latala project.