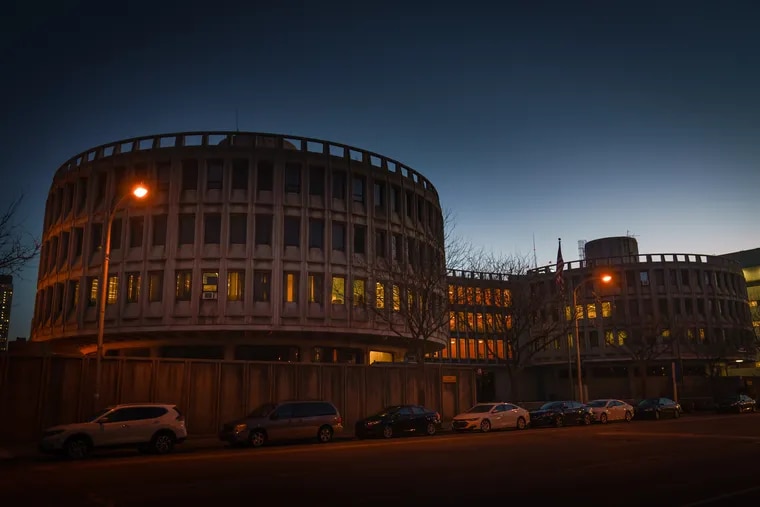 That’s the question facing the city of Philadelphia as it gradually removes the former police headquarters from Seventh and Race streets, its undulating concrete outlines known as the “Roundhouse.”

“When I was growing up, [people in the neighborhood knew] you don’t want anything to do with the Roundhouse,” said Luz Crespo, one of about 100 people who gathered Thursday to talk about the building’s future. “It’s the police, that’s the problem.”

The Roundhouse’s future has been uncertain since police began planning to move to a new headquarters – The Inquirer’s former building at 400 N. Broad St. – in 2017. The city was in the process of drawing up a plan for the sale of the Roundhouse in the summer of 2020.

It was always going to be tricky selling a police headquarters that inadvertently looks like a pair of handcuffs. But after the murder of George Floyd and the resulting wave of protests against police misconduct, the building’s history began to feel awfully charged.

This is why the city is embarking on a new form of community action for the site. Instead of starting with a traditional request for proposals from developers, the Planning Commission is leading a community outreach to give Philadelphians a chance to express their feelings and hopes for the building. The process is expected to take a year, with listening and engagement sessions taking place in neighborhoods across the city in the coming months.

Two consultancies, Connect the Dots and Amber Art and Design, have been selected to help lead the “Framing the Future of the Roundhouse” project. They spoke to former police officers, people locked up in the Roundhouse and groups of young people. One of the original architects, Robert Geddes, now 98, will be interviewed next week.

“A typical engagement process might go straight into what the Roundhouse should be like, as we try to spend a lot of time thinking about what it meant to people and how we can move forward” , said Marisa Denker, co-founder and president of Connecting the Dots.

On Thursday, the Planning Commission and its consultants held their first in-person public engagement session in Franklin Square, around the minou corner of the Roundhouse. Dozens of people showed up to chat with staff members, deliver speeches from a podium, and draw their dream projects on paper prints of the building’s layout.

The Roundhouse sits at the northernmost border of the clutch of institutional buildings around Independence Mall. Thursday’s intense heat highlighted the isolated, shade-free location of the former police headquarters, which is surrounded by surface parking lots and multi-lane expressways.

“I’m wrong on the historic preservation side,” said Mijuel Johnson, who works as a black history tour guide in the city. “Like most people, I’m not a big fan of brutalist architecture, let alone the brutal history that [the Roundhouse] has. But it’s a unique building, unique to Philadelphia.

The Roundhouse was designed in 1959 by the Philadelphia architectural firm Geddes, Brecher, Qualls & Cunningham. Ninety percent of the building is concrete created by an innovative Dutch architectural molding system known as Schokbeton. Originally, the ground floor was to be made of translucent glass to give an air of transparency. The concrete wall that gives the building a fortress face was added later.

The Roundhouse’s innovative design was part of a modernizing moment in Philadelphia’s history when the city charter was fresh, civil service standards were professionalized, and reformist politicians were in power.

Broader Brutalist architecture and innovative Dutch design were seen as part of this liberal trend. The same goes for the move of police headquarters from the basement of City Hall – a location seen as a holdover from the patronage era – to its own modern, freestanding building.

But the Roundhouse’s beginnings roughly coincided with a rise in crime that began in the mid-1960s and continued through the early 1990s. This fueled an increase in spending on law enforcement. law, which have become more aggressive and punitive as the war on drugs has intensified.

Locally, the building coincided with the rise to power of Frank Rizzo, the policeman-turned-mayor who would permanently end the post-war reform period of Philadelphia’s history. The building’s imposing carcass soon became associated with its aggressive political and policing style and, particularly in black and Puerto Rican neighborhoods, with an increased presence of the prison state.

“I knew a lot of people who would do bad things, and they should go to the Roundhouse,” said Crespo, who moved to Philadelphia with his family from Puerto Rico in 1956. But his feelings for the building — and the service police – are more complicated than that. “I have a brother and a sister who gave 40 years to the police, so I respect authority a lot.”

The building is not historically protected, although there is a pending designation. The most common refrain among Thursday attendees was that it should be a place of “healing,” perhaps for advocacy groups that serve marginalized groups or a nonprofit arts space.

Such plans would presumably be difficult to monetize and sell to for-profit developers to balance the $322 million the city has spent on the drawn-out process for new police headquarters. But developers say they are far from taking specific proposals.

“We have to be careful with the engagement process because the city can’t dictate what it will be,” said Denker, one of the city’s consultants. “We can’t say, oh, there should be a park here, a playground there. But so far people are generally talking about what it meant and how it should be related in the future.

Future events and online engagement can be found at Framing the future of the rotunda.