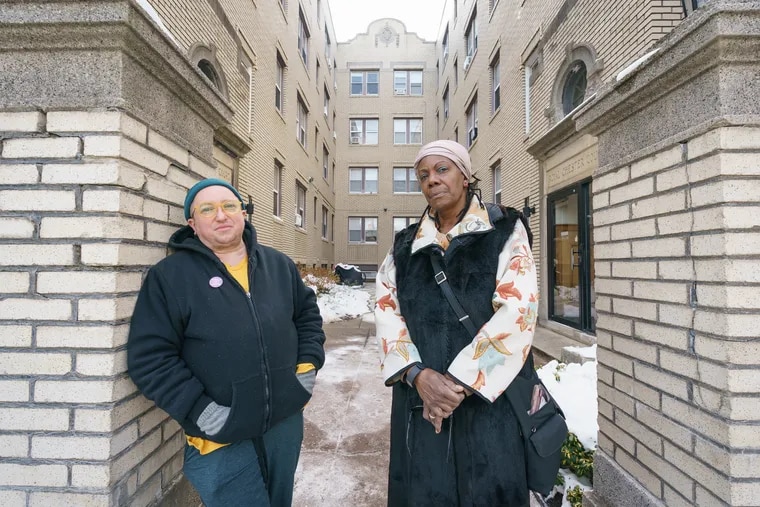 On a freezing night in mid-January, Adrian Bower woke up in their West Philadelphia studio feeling freezing cold.

The apartment was freezing again – something Bower and other New Horizons Housing tenants say they got used to. From late 2019 to late January, the 58-unit apartment building at 47th Street and Chester Avenue lacked heat overnight, five tenants said.

“I was so miserable,” Bower said. “I was lying in bed and began to wonder why in Christian tradition hell is so often described as a lake of fire rather than freezing cold.”

Owners are required to heat the units to at least 68 degrees from October 1 through April 30, according to the Philadelphia Property Care Code. But residents told The Inquirer that heat in the building has often been lacking for hours at night for more than two years.

Their experience touches on why resolving maintenance issues can be difficult for tenants: they aren’t sure their concerns are worth filing a complaint, they don’t want to strain relations with their landlords, or they don’t know how to get help.

The building now has new heating, but housing advocates say the years-long saga of these residents is an example of how tenants are less aware of resources and options when faced with habitability problems. The help, advocates say, is not limited to tenants facing eviction.

And an apartment fire in the Bronx last month that killed 19 people, started by a resident using a space heater, highlighted the dangers of insufficient heat.

At 47th and Chester, some tenants bought electric heaters and bundled up in blankets and coats. One resident said he even used his oven to warm up, a serious safety risk due to potential fires and carbon monoxide poisoning.

“The possibility of someone using an unsafe heater because it’s their grandmother’s, or 50 heaters at once causing an electrical overload… increases the risk of fire,” said Ezra Nepon, 43, a New Horizons resident for more than three years.

Inspectors from the Philadelphia Department of Licensing and Inspections contacted building management and visited the building five times since 2020 due to 311 complaints. But it wasn’t until an inspector arrived at 6.50am on January 14 that they found “insufficient heat” and issued violation notices, which were quickly addressed as a fix was already on the way.

The new boiler installed in late January was ordered in September 2021, said a company official who requested anonymity, but due to pandemic-related delays it only arrived last month.

With the exception of one night, tenants say the heat has been steady.

“We are here to serve our residents and we are doing a great job in all of our buildings,” the company manager said. “If it hadn’t been for COVID, the boiler would have been there for two weeks.”

New Horizons said a broken controller caused the problems in 2019 and 2020 and was replaced in 2020. The new heating system was part of a capital investment as the old boiler became less efficient, the rep said. . Once management learned of the heat disturbances, they said they had a maintenance person watching the boiler 24/7.

New Horizons Housing said it sent several building-wide emails, including notes in October and November they provided to The Inquirer, advising tenants that a new heating system had been ordered but supply chain issues caused a delay.

When residents complained about the heat, New Horizons said it was offering electric space heaters, plus $10 a month to offset extra electricity usage. Management said seven tenants accepted the offer.

Nepon received $180 for 18 months of irregular heat. Lambert was only credited for 12 months. Bower and two other tenants who asked not to be named said they had no idea the tenants could get a refund – Bower said the management company provided them with a heater.

“I sympathize with the challenge of solving the problem,” Nepon said. “What I have no sympathy for is that they did not communicate with the tenants in any way.”

The building is a mix of studios, one-bedroom and two-bedroom apartments ranging in rent from around $850 to $1,300. Tenants describe neighbors as a mix of college students or young adults, with children and older adults dotted around the building, many attracted by the fact that heat and water services are included in the rent.

“You have people trusting you with their money to provide a roof and you say you’re going to provide x, y and z, in this case heat, and you’re lax about that,” Lambert said.

Nepon, Bower and others said they submitted dozens of maintenance requests through New Horizons’ internal tenant portal. Since 2020, eight heat complaints have been reported to 311, including five from Nepon, who also eventually reached out to council member Jamie Gauthier and state Rep. Rick Krajewski for help.

Best Practices for Filing a 311 Complaint

Bower did not press the management further as maintenance generally responded to repair requests. Also, Bower said they would have a hard time finding a better lease if their relationship with management deteriorates.

“I don’t have a ton of choices,” Bower said.

» READ MORE: What Philadelphia-area renters are looking for in an apartment

Osarugue Grace Osa-Edoh, a lawyer with Community Legal Services, said part of what her organization is doing is changing that perception.

“A lot of times tenants don’t communicate with each other,” she said. “They think, ‘I can’t stand up to this owner,’ and that may or may not be true, but as a group they definitely have more power than individually.”

Osa-Edoh said tenants have reason to be optimistic when maintenance issues arise.

“There are many things that [renters] could do, but there are also a lot of things they should know,” Osa-Edoh said. “For example, every case related to repairs and rent reduction starts with a notification.”

Tenants must have written documentation establishing a repair issue with its owner or management company. These releases can establish whether a landlord is responding to complaints in a timely manner and make it easier for a landlord to pursue legal action if issues remain unresolved.

Sometimes just having someone advocate for tenants can put pressure on landlords to take care of repairs. Seeking professional help does not lock tenants into a specific course of action.

Nepon and his neighbors hope, at the very least, that their experience can help other worried tenants navigate conversations with landlords.

“This system forces people to do all these things [to get results]it doesn’t seem fair,” Nepon said.

Message to New FDIC Leaders: Crack Down on “Lease a Bank” Loans

NAIOP: The impact of commercial real estate on the US economy is growing