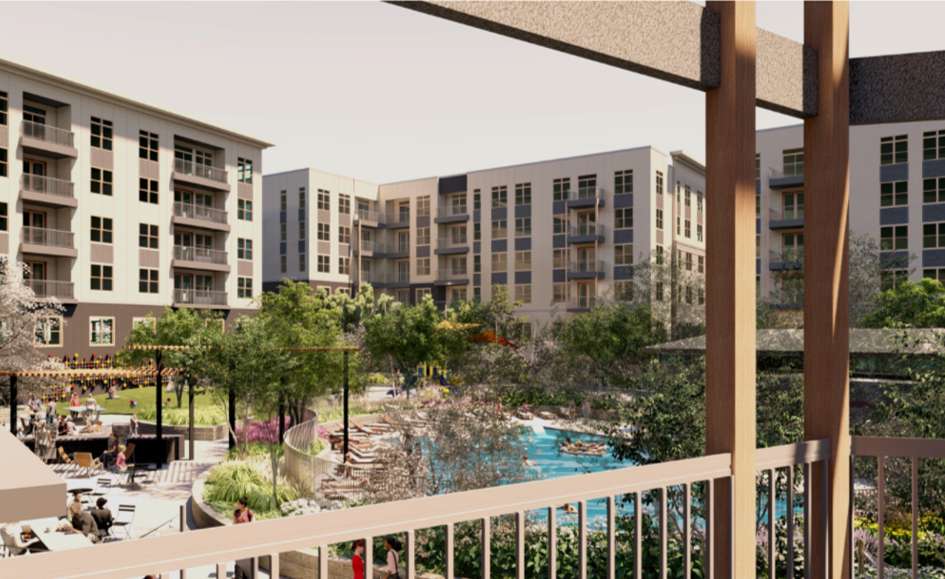 The retail, recreational facilities and other amenities promised to MetroWest residents are finally on their way.

Developer Pulte Homes on Tuesday (January 25th) received approval from the Fairfax County Board of Supervisors for its plan to construct five new residential buildings in the 56-acre community south of I-66 and the subway station in Vienna.

the 9-0 votes represented a milestone in the county’s efforts to realize a 15-year-old vision of MetroWest as a mixed-use development that would have predated the Mosaic District and recent growth of Tysons, had it come to fruition by the time foreseen.

“We want to achieve the community’s goal of completing these last land bays,” DLA Piper attorney Antonio Calabrese said as a representative for Pulte in Tuesday’s public hearing.

County approved in 2006MetroWest’s original plans were to transform a neighborhood of single-family homes with 2,248 multi-family residences, 300,000 square feet of office space, and at least 100,000 square feet of retail and other commercial uses, including a day care center.

While some of the residencies have come to fruition, including housing for the elderly and an assisted living facility, the five buildings where Pulte has concentrated its retail space and a town center planned by developer CRC Companies to the point of death after the 2008 recession.

With the rezoning request approved this week, Pulte amended plans to increase the daycare’s enrollment cap from 100 to 150 children and requested that the facility be included in the 35,000 square feet of ground-floor commercial space that he agreed to provide.

The proposed mid-rise and high-rise buildings will also have 480 residential units, of which 52 affordable housingand a publicly accessible community park with a swimming pool reserved for MetroWest residents, among other recreational facilities.

Additionally, Pulte will contribute $500,000 for safety improvements at the intersection of Royal Victoria and Vaden Drive, according to Providence District Supervisor Dalia Palchik, who represents MetroWest but was absent for the vote as she was on maternity leave.

In a statement to Tysons Reporter, Palchik’s office called the revisions “a refinement and improvement” over what was approved in 2006, noting there were no changes to the allowed density at MetroWest.

“Supervisor Palchik greatly appreciates the cooperative effort of all stakeholders to improve the design of the yard, pool, paths and buildings,” the supervisor’s office said. “…[She] looks forward to continuing to work with all stakeholders to see MetroWest completed. »

Calabrese told Tysons Reporter that the developer will now begin work on detailed site plans and engineering for the approved buildings, although there is no clear timeline yet for when construction might start.

“Pulte is grateful to Supervisor Palchik for her courage and leadership,” he added.

Regarding the CRC portion of the project, the developer said last fall that it had received administrative approvals for the 9.8 acres downtown and could potentially start in mid-2022, pending county approval of a submitted site plan.

Discussions to resolve reported conflicts between Pulte and the CRC are still ongoing.

“There have been fruitful and ongoing discussions between these large landowners,” Calabrese said. “All associated with MetroWest recognize the tremendous potential and value of these strategically located sites, and the benefits inherent in completing this attractive and thriving community.”