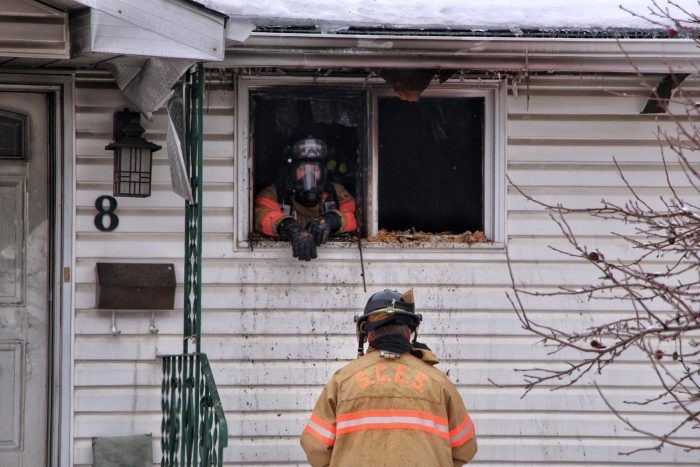 Quick work by local firefighters saved a home near Ivy Crescent and Alder Avenue on Monday, January 24, however, not all residents made it out safely.

Strathcona County Emergency Services were called to a residential fire at 1:47 p.m. Monday. SCES responded to the call with two squads, a tour truck, an ambulance and the platoon leader. Crews were able to stop the flames from spreading and contained the fire to one room in the house.

“The fire was quickly brought under control by the first squad to arrive,” said Platoon Leader Barry Bouwsema of Strathcona County Emergency Services. “The fire appeared to be isolated to one bedroom.”

Residents were able to get to safety, but one person was taken to hospital and two pets died, a cat and a bird.

“A patient was taken to hospital by ambulance for assessment, and there was a report of missing pets at the home. They were found deceased shortly after,” he said.

It is not known what injuries sustained the person taken to hospital, whose name and age have not been released.

Although confined to a bedroom, Bouwsema said the house was not spared.

“There was extensive smoke damage to the house, but the fire did not spread beyond the bedroom. The Fire Investigations Branch estimates approximately $150,000 in damage,” said Bouwsema: “It was limited to one room, so it’s far from a total loss.”

The cause of the fire is still under investigation.

Bouwsema said the warmer weather has certainly made things easier for crews responding to fires, but it has also led to more calls for other emergencies.

“The cold weather is very hard on the teams and our equipment, but the problem with our freeze-thaw cycle that we find ourselves in, as everyone can see from their sidewalk and driveway, makes road conditions dangerous” , did he declare. “This is the fifth time this winter that we have had freezing rain and the number of motor vehicle accidents we respond to reflects that.”

Local fire crews have been busy this month and not just in Strathcona County. SCES was also involved in a house fire in Fort Saskatchewan earlier this month.

“On January 2, at approximately 5:14 p.m., our squad from Station 4 was dispatched on a request for mutual assistance to a structure fire in Fort Saskatchewan,” Bouwsema said. “This was an attic fire in an apartment house and our teams were involved in a primary and secondary search of the first floor and basement.”

The fire was extinguished by Fort Saskatchewan. The platoon leader noted that the SCES was satisfied and local firefighters provided on-site services for an hour.

Clinics can help appoint Allen Gast to nonprofit’s board