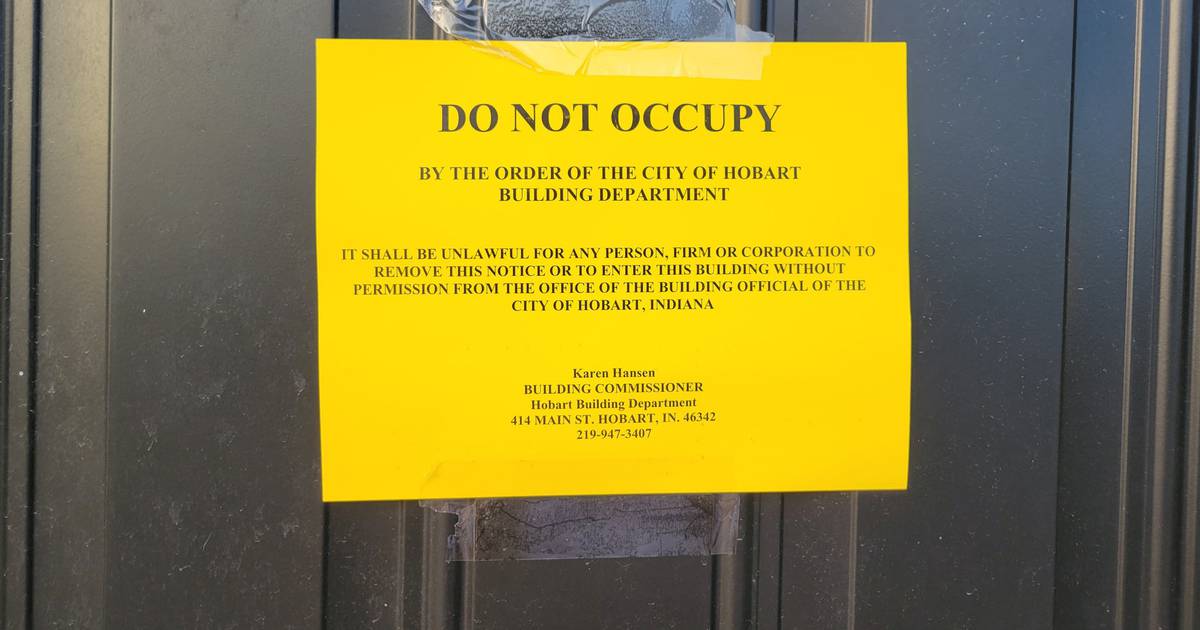 At least 24 people were left homeless on Monday night after a welfare check called to the Hobart Fire Department earlier today revealed horrific conditions in their building.

Firefighters performed a wellness check on an elderly woman who lived in a basement apartment in a century-old 11-unit apartment building at 215 East St., just east of downtown, sometime afternoon on July 11, city officials told the scene. Firefighters first discovered that the basement windows had been boarded up and sealed.

Firefighters later learned the woman had been moved out of the dwelling, officials said, but further investigation showed the building had, among other issues, standing water in the basement, leaks water in the main electrical box and out of the electrical outlets, and sewage from one unit bubbling up in the tub of another unit. City officials then posted bright yellow “Do Not Occupy” signs on doors on Monday afternoon, but did not tell residents they had to leave because although the building was unsafe, the city would not allow it. has not yet officially condemned.

That could happen in the coming days as firefighters complete their investigation and submit their reports, said Hobart building manager Karen Hansen.

Dazed and scared, residents gathered in its parking lot Monday night as city officials raced to find them shelter. A local plumbing company left after temporarily shutting off the water as family and friends brought boxes so residents could take at least some of their belongings to where they were.

Residents of the building said they were living in deplorable conditions because their rent was relatively cheap compared to other places. Several, like Angela Ruiz, said they contacted landlord Joseph D. Gore and building manager Hailee Stover multiple times about issues with little to no response.

Angela Ruiz and her husband moved into the building in January after her job moved to northwest Indiana from Virginia Beach, Va., she said. Photos Ruiz took and showed to the Post-Tribune Monday and texts she sent to Gore illustrate that the apartment they moved into — for which they are paying $975 — was filthy and riddled with hypodermic needles, as well as burns to the carpet and floor, from the former tenant, whom Hobart police have since been searching for.

A month after they moved in, Ruiz said she started having breathing problems, so she asked Stover for new furnace filters. Stover initially said she would get them but never did, Angela Ruiz said.

Since February, Ruiz said he has been hospitalized twice. doctors told her she had nodules in her lungs likely caused by black mold or other contaminants, which Hobart firefighters found in the building.

In a June 24 text message to Gore, of Valparaiso — owner of Pinnacle Realty LLC on Lincolnway and listing himself as a licensed contractor on a social media profile — Ruiz expressed his frustration.

“Joe (we pay our rent on time)…I’ve been trying to get the filter changed since Feb. I think it’s ridiculous,” she wrote. “I think we’ve been very patient and now there are ants in the hallway coming in (through) our door with centipedes, we’ve seen several big ones in our apartment.”

Ruiz went on to say that not only did they have to order and replace their mailbox lock themselves, but Stover – who also works as a real estate agent for Gore at Pinnacle – told them they were responsible for cleaning their own vents, which Ruiz said she did. Ruiz also told Gore that “the closest doors that lead to the back stairwell are still not fixed”; she told the Post-Tribune that she heard and felt people partying in that stairwell.

“All of this and I’m just asking for the size of the filter so we can buy it and someone can replace it. We don’t have access to it,” Ruiz wrote. “No response is unacceptable.”

Gore also did not respond to that text, Ruiz said.

Ruiz and her husband paid nearly $4,000 to move into 215 East, including the first month’s rent, and had to dip into their savings to do so. She doesn’t know how they will move again.

“I take care of my granddaughter who has special needs and she’s already upset from the fuss,” Ruiz said. “All I asked for was a filter.”

Don Brant, from Hammond, tried to console his daughter, Samantha, who also moved into the building in January. She will stay with him until she knows where to go next, he said.

“Twenty years ago, I had a fire and I lost everything. It was bad,” Don Brant said. “These people have nowhere to go, and I know how that feels.”

Residents will have somewhere to sleep until at least Thursday thanks to Joe Clemmons of the Hobart Township Board, who has booked rooms for them at a local hotel. Hobart Councilor Chris Wells, R-5, planned to buy gift cards with the donations he received through his campaign page for families to buy food while a local church coordinated a meal train to take to the hotel, he said. On Monday night, he said people had donated nearly $300 to the cause.

Building official Hansen said Gore had agreed to meet with her, Mayor Brian Snedecor and other officials at 10 a.m. Tuesday to discuss the condition of the building and what actions, if any, he is considering. to take to remedy the situation.

Gore did not return a request for comment from the Post-Tribune.

Michelle L. Quinn is a freelance writer for the Post-Tribune.