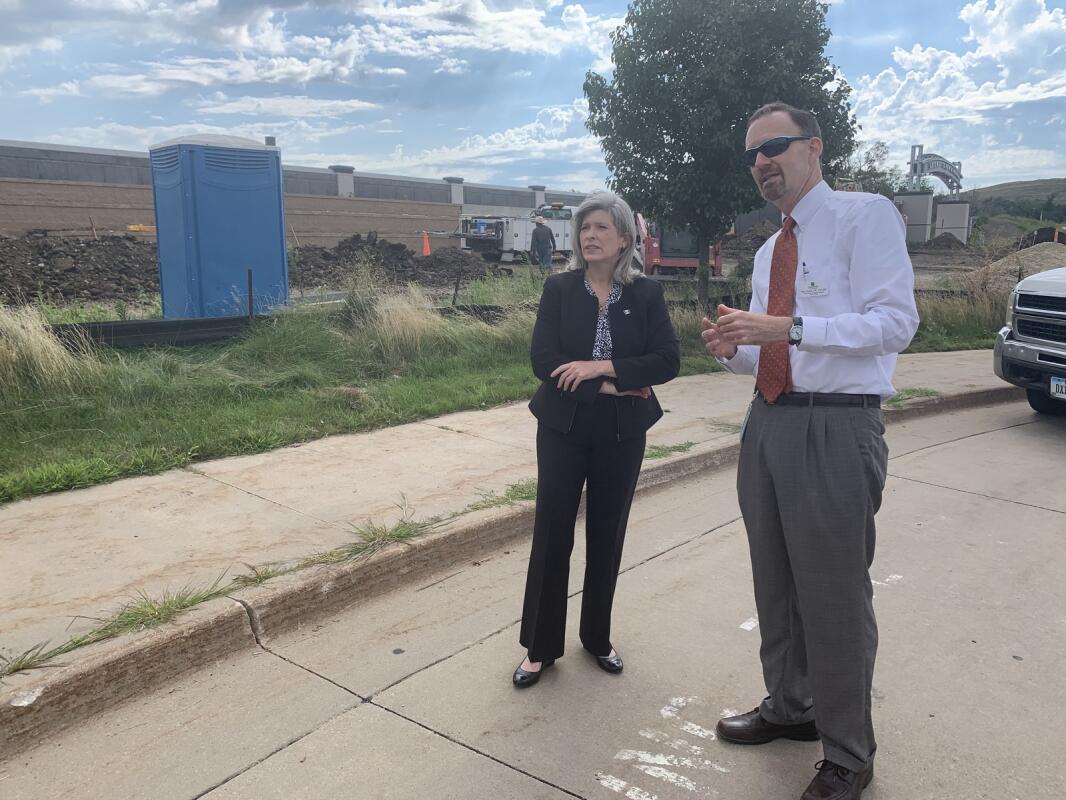 CEDAR RAPIDS — During a walking tour of Cedar Rapids flood infrastructure Friday morning with Republican U.S. Senator from Iowa Joni Ernst, city officials said they plan to seek $50 million in dollars through the U.S. Department of Transportation’s Bridge Investment Program to fund the reconstruction of the Eighth Avenue Bridge over the Cedars River.

The Bridge Investment Program was created by the bipartisan Infrastructure Act. Ernst voted against the bill, but Republican Chuck Grassley, senior senator from Iowa, was among 19 Senate Republicans who joined 50 Democrats in voting for the legislation.

Once again, Cedar Rapids has not received the $22 million requested for the Eighth Avenue Bridge project in the latest round of federal RAISE grant allocations, or “Rebuilding America’s Infrastructure with Sustainability and equity”.

Rob Davis, manager of Cedar Rapids’ flood control program, said the city included construction management costs and tried to account for inflation in its $50 million request for the flood program. investment in bridges. The funds would cover two-thirds of the project’s $75 million cost, though Davis said the city will reassess costs for that project in the near future and for the entire flood control system next year.

The city council must authorize the submission of the grant application at its meeting on Tuesday.

Ernst said she was surprised the RAISE funds were turned down this time around, but pledged to phone press officials in Washington to get funds from the Bridge investment program.

“We have so many great plans across Iowa,” Ernst said. “… We’re going to go back and have that conversation with (Secretary) Pete Buttigieg at DOT, so we’ll keep pushing.” I think it’s important to do that, to continually advocate, and to be that grinding wheel for the Iowa projects that really matter. And that’s really important to the community.

With about a quarter of Cedar Rapids’ $750 million flood control system permanent, city officials say they remain aggressive in seeking additional federal funds to speed up construction and rein in rising costs to as inflation rises.

More recently, Ernst, a member of the Senate Environment and Public Works Committee, successfully incorporated language proposed by Cedar Rapids into the Water Resources Development Act of 2022, which city officials say could release about $50 million for east side flood control works. Semi-annual packages allow the Army Corps of Engineers to carry out water resource projects.

Army Corps of Engineers funds do not cover flood mitigation on the west bank of the Cedar River due to the Army Corps break-even point. According to the formula, the cost of adding flood control to the west side was greater than the value of the buildings it would protect.

Ernst heard from city and Cedar Rapids Metro Economic Alliance officials, as well as local business leaders and developers, who touted progress in efforts to fortify Cedar Rapids against rising Cedar River waters. after the 2008 flood. Business representatives told Ernst that the city’s work on flood infrastructure assured them that their investments around the river in downtown and central neighborhoods would be protected.

City Manager Jeff Pomeranz said Cedar Rapids is using resources provided by the federal government, supplemented by state and local dollars, to support flood protection on both sides of the river.

“We need additional resources and the senator is very aware of that,” Pomeranz said, adding that he appreciates the work of the congressional delegation to get more dollars for flood control.

Ernst said major projects are “really cut short because of the cost of building materials, cost of labor, and fuel costs.” On the heels of President Joe Biden’s signing into law of the Democrat-backed Cut Inflation Act, which Congress narrowly passed along party lines, Ernst among Republicans who voted to unanimously against the bill, said dollars should be committed to ongoing projects such as Cedar Rapids flood control instead of going into new efforts.

Local officials highlighted Ernst’s progress with downtown flood mitigation projects. This included the Third Avenue relocatable flood gates and the Tree of Five Seasons Park, where the Army Corps intends to bid to add relocatable gates on Second Avenue, a flood wall at the Five Seasons Tree and rolling doors under I-380 on the east side.

On the west side, city officials highlighted the McGrath Amphitheater flood wall and 16th Avenue rolling doors that are anchored by walkway arches in Czech Village and New Bohemia.