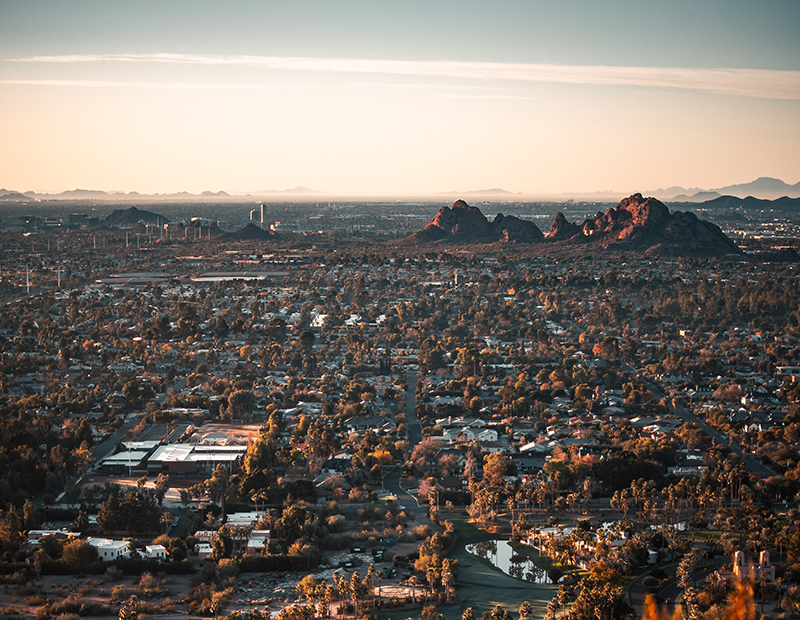 Phoenix is ​​widely known for its warm temperatures and dry climate. However, despite the city’s reputation for not being the most sustainable, the metro has gained ground in its commitment to turn the tide. Over the past few years, city officials have implemented several initiatives to create a cooler, greener city, and it seems to be working.

In 2016, the Phoenix City Council adopted eight 2050 environmental sustainability goals to promote the city’s desire for long-term environmental growth. These included transportation, waste, water management, building and land use, parks and open spaces, clean air, and local food systems. The city ranks 16th on the EPA’s 2021 list of cities with the most Energy Star buildings. To achieve Energy Star certification, one must use 35% less energy than typical buildings.

In honor of Earth Day, let’s take a look at how Phoenix’s sustainability efforts are evolving and how commercial real estate is playing a role.

Go from A to B

The Transportation 2050 plan calls for tripling the number of light rail miles to 60, allowing 90% of the population to be within 10 minutes’ walk of public transit, creating 300 miles of cycle paths or passable canals and encourage walking and cycling in all communities. In addition, the plan calls for reducing the carbon intensity of the current transport system by 80% by developing 15 compact comprehensive centers throughout the city to provide necessary services to local residents and by encouraging environmentally friendly modes of transport. environment and infrastructure needed for electricity and low carbon. gasoline vehicles.

“The City of Phoenix estimates there will be 280,000 electric vehicles in the region by 2030, and we believe that number will be even higher,” said Mark Sonnenberg, senior vice president and partner – Southern Region. -West, CRG. Commercial Real Estate Manager.

Phoenix is ​​currently overhauling its transit stations, including the South Central Extension/Downtown Hub which will connect its current light rail system and operate southbound. There is also a development at McKinley Street creating a loop to the existing Valley Metro Rail, adding an extension to Washington and Jefferson streets and the Third Avenue loop that will connect to the future Capital Expansion project. The city is also continuing work on the 8.3-mile I-10 West extension connecting Valley Metro Rail to west Phoenix, marking the county’s first major expressway reconstruction project.

As the city averages 106 degrees, officials are coming up with new ways to protect its residents and the subway from the heat. Two years ago, Phoenix adopted the Cold Pavement System, which involves applying a reflective coating to sidewalks and driveways to lower extreme surface temperatures. The program was a success, resulting in an average temperature of 10.5 to 12 degrees lower than that of traditional asphalt. Last weekend, Phoenix Mayor Kate Gallego shared on Twitter the start of the Cool Corridors program, which showed her planting the first of 100 trees and shade structures around the city to help reduce the heat. The first is in Cesar Chavez Park. The city aims to double its tree and shade canopies to 25% by 2030.

Phoenix’s goal for 2050 is to have all residents within a 5 minute walk of a park or trail. This is being done by adding 150 miles of footpaths, greenways and bike lanes through the city and turning an additional 150 miles of canals into public space. According to the city’s website, Phoenix has more canals than Venice, but they need major upgrades to use.

The city aims to reduce the community’s carbon emissions by 80-90%, with the longer term goal of 2060 to become a carbon neutral city. All new buildings constructed after 2050 will be energy and material positive, meaning they will produce more energy than they consume. Some initiatives to achieve this are passive design, water reuse, and the inclusion of renewable resources and materials.

“The City of Phoenix uses its Phoenix Green Building program. This program promotes and recognizes companies that volunteer to operate in a more environmentally responsible manner,” said Andrew Cheney, Coppola-Cheney Group Director. CPE. “There are no formal incentives from the city. Developers are also looking to design their projects to be eligible for energy rebates from the two main utilities: SRP and APS. »

CRG is currently working on two major industrial projects in the region, The Cubes at Glendale and The Cubes at Mesa Gateway. The latter required one of the most massive and complex infrastructure improvement scopes of any of the company’s industrial parks.

“The utility expansion has been particularly challenging because the site sits between two transmission lines, as well as a rail line, with the rail provider offering to add a branch line directly to the site,” Sonnenberg said.

The company had to work with city and county agencies, utility providers and two national rain-haul companies to lay the groundwork needed to support the $300 million, 268-acre park.

SkySong is another example of development in the metro area using these programs. The ASU Scottsdale Innovation Center is a 1.2 million square foot mixed-use project comprising Class A commercial office, retail, restaurant, hotel and multifamily in Scottsdale. All five office buildings have achieved LEED Silver certification, have recycling and water reduction programs, and a state-of-the-art shade structure.

“If you ask most developers and contractors, they practice sustainable practices in the middle of the fairway,” Cheney said. “They use LED lighting wherever possible, along with electric vehicle charging stations, low-waste materials, low-flow plumbing, recycling materials, landscape-free landscape, and use more concrete instead of asphalt to reduce the heat island effect.”