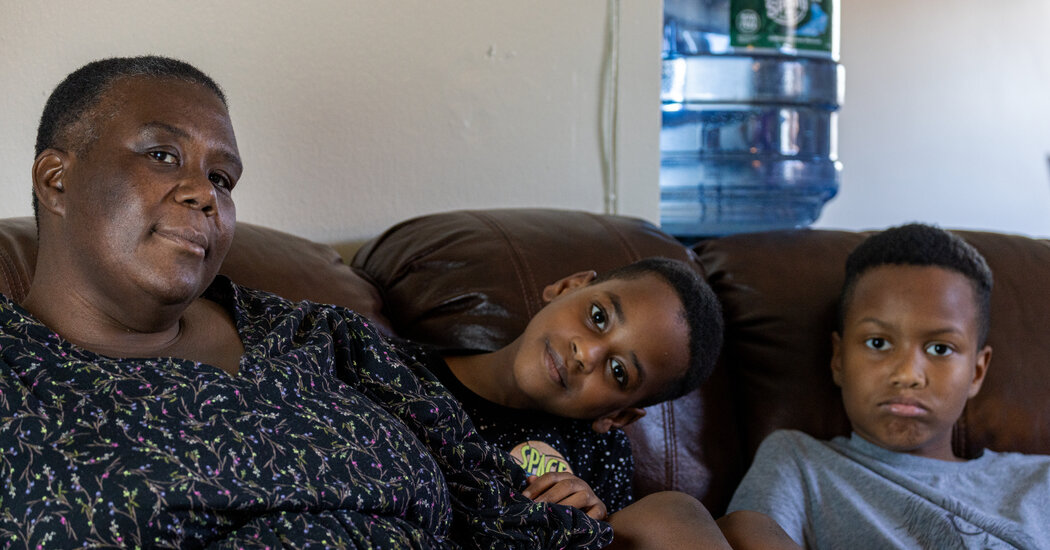 Most mornings, La Keesha Taylor spends a few minutes in bed with her eyes open after waking up, assessing the day ahead.

His first thought: “Am I going to have hot water?”

It’s not his only concern. “It’s a added burden,” she said. “I have two kids, so I have to wake up and deal with what they bring in the morning, when I’m also thinking, ‘Is the water going to be there?'”

During the winter, Ethan and Anthony, who are 7 and 11, are careful not to touch the radiators because when the appliances are running they are often hot enough to burn their skin. Sometimes Ethan wakes up with a nosebleed from the dry night air.

Once Mrs Taylor has ushered the boys out, it remains to be seen if the elevators will work. “Sometimes they run for a while,” Ms. Taylor said, “but then they crash again.”

The Taylors live on the 25th floor, at the very top of John Haynes Holmes Towers, a two-building NYCHA development on the Upper East Side with 939 residents, all hoping their four shared elevators will work.

When they’re not, the Taylors have 50 flights of stairs to tackle for a single trip outside. “It is what it is,” Ms. Taylor said. “I live at 25. I have to go up there.”

NYCHA, or New York City Housing Authority, is the agency that oversees subsidized apartments across the city – about 179,000 of them. Each tenant’s rent is set according to that person’s income and there is a list of approximately 160,000 applicants waiting for housing in the system.

Ms Taylor has lived in her family’s flat all her life, climbing the same stairs on and off for 48 years. She underwent hip surgery in November 2021. “It breaks down my body,” she said.

When elevators operate, they make a precarious journey, sometimes stopping at an unrequested floor and reversing direction before reaching the requested floor. Buttons don’t light up when pressed, operator call button is often broken, and sometimes lights flicker or go out completely. “I grew up fearless,” she said. “I was in the elevator when it fell several floors – suddenly.”

Sometimes she takes a friend’s daughter to school, and the girl always clings to Mrs. Taylor’s leg when they enter the elevator. “They keep telling me they’re going to fix it,” she said. “All I keep telling them, ‘You’re playing with our lives.'”

Original tenants: Ms. Taylor’s parents moved into the Holmes Towers development shortly after it opened in 1973. Her mother was from South Carolina, her father from Georgia. “When this building was built,” she said, “they were one of the first black families to live here – they were among the founding fathers.” At 18, Ms Taylor became eligible to be added to the family lease.

At the time: When she was a child, Ms Taylor was allowed to play outside on her own, but she couldn’t go past 96th Street. “Mom wanted to look out the window and see me,” she said. “If she couldn’t see me, I was in trouble.”

When Mrs. Taylor and her neighbors return home at the end of the day, more trouble awaits.

Like so many others in the development, the Taylors have rats and cockroaches in their apartment. “These buildings are infested. The grounds are infested. At night you see them.

When Mrs. Taylor’s sons play outside, they regale her with stories of rodents watching crawling up the sides of the building. “And when you sign up with the exterminator,” she said, “they come by, give you three mousetraps, and leave.”

Earlier this year, the Taylors were moved to a nearby hotel for a few days while the asbestos was removed from their apartment. Mrs. Taylor suffers from asthma, as does Ethan.

“‘You get what you get’ – that was the attitude we had when we started complaining,” Ms Taylor said. “And I thought, ‘No, you have hot water all the time, you have a reliable elevator. “”

She said her written complaints — or “tickets” — take months to get answered, if they receive one at all. Much of her correspondence takes place online, and she noted that tenants are instructed not to go directly to super or maintenance.

So Ms Taylor – who studied early childhood education and psychology at City College and spent several years as a pre-school teacher – started organising.

She worked with a small cohort of roommates in Holmes Towers and the Stanley M. Isaacs homes – a nearby NYCHA development – ​​to form the Holmes-Isaacs Coalition. “We had to do a lot of door-to-door, a lot of meetings, to get enough people interested and let them know you have rights,” she said. “You have the right to have regular heating and hot water, to have safe elevators, not to be afraid of rodents. We had to work hard. »

The coalition began keeping written records of elevator service issues and worked with an independent inspection company to identify violations.

“It takes determination — and I’ve always had it. Have you looked at my door? she asked, referring to the black power flag hanging outside the entrance to her home under a list of hashtags written in a range of bright colors: #FullyFundNYCHA, #BlackLivesMatter, #TogetherWeCanWin.

“I don’t play,” Ms. Taylor said. “Not with my life, not with the life of my children. And I feel the same for my neighbors. I defend myself, but I also defend others. You have to. You must speak for those who cannot speak for themselves.

Eventually, the coalition began working with two attorneys, Paula Segal and Michael Leonard of TakeRoot Justice, and filed a lawsuit against NYCHA in 2019. To Fix It, We’ll Fix It. But there is no accountability,” she said.

Since the coalition sued NYCHA, she added, some things have improved — some of the problems with the elevators have been fixed and they break down less often — but many problems persist, especially with the elevators. extermination services and heating.

A NYCHA spokeswoman said the agency does not comment on ongoing litigation, but steps are being taken to improve conditions in the building, including regular visits and educational opportunities for residents of Holmes Towers to learn more about pest prevention.

Earlier this year, the prosecuting judge asked the coalition to engage closely with NYCHA’s compliance unit and told attorneys from both sides to meet outside the courtroom to address the remaining violations.

“Living here has aged me so much,” Ms Taylor said. “They killed my sense of security, stability and confidence.”

Every night when she goes to bed, she tries to close her mind and not think about the morning – the hot water and the radiators, the elevators, the precariousness of it all. “We are suffering,” she said. “Everyone in the building is suffering. And I’m tired. But my work is not finished. Not yet.”