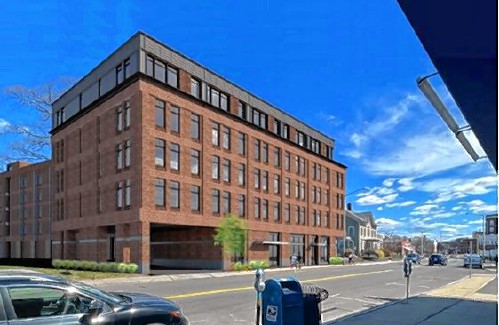 NORTHAMPTON — A five-story, $45 million commercial and residential building slated for 79 King St. will seek tenants 55 and older who are looking for a home where they can age in place — and perhaps ditch their energy guzzlers in the process.

The developers of the 70-unit mixed-use structure, on the Goggins Real Estate site, are Live Give Play and Spiritos Properties, which is working on its inaugural project to help seniors who are looking for services and a community that will enable they stay at home as long as possible. The prefabricated solid wood structure will be assembled on site, saving several months of construction and, according to the promoters, promoting reforestation.

Live Give Play wants its properties to encourage “crowdfunding philanthropy,” according to founder and CEO David Fox, so tenants will be expected to volunteer in the community.

“We believe that a full life also involves service, and we’re going to facilitate that among our tenants,” Fox said. “Our tenants can be mentors to people in the community.”

Although not a requirement, we hope that tenants will be willing to give up their non-electric cars in exchange for easy access to the cycle path at the rear of the property and proximity to shops and other important services. . The property will offer a fleet of six electric cars for rent to tenants and planners want to attract a retail bicycle store.

Surveys by organizations such as the American Association of Retired Persons have consistently found that most older people would prefer to age in place, while the Kaiser Family Foundation found in 2018 that a third of people aged 65 and over, and half of black and Hispanic seniors have incomes below $25,760 a year.

The new development responds to a “national crisis of baby boomers living in homes they can no longer afford,” Fox said. “We’re giving people a way to sell that suburban house, to get away from it all.”

BKSK Architects’ design calls for a 110,000 square foot building with high ceilings and a focus on energy efficiency. Berkshire Design Group is the civil engineer, surveyor and landscape architect for the project.

Berkshire manager Jeff Squire on Wednesday called the development a “game changer for King Street”, which has few housing options, and a “catalyst” for future growth on the busy corridor.

“It will be the biggest thing to happen on King Street for several years,” Squire said, adding that the rent would be “at the accessible market rate.”

The construction will meet “passive house” standards, Fox said, which means it is eligible for $210,000 in rebates from the state organization Mass Save.

“Passive house design focuses on robust insulation and airtightness, high-performance glazing, and simplified mechanical systems to dramatically reduce energy consumption while creating a comfortable, resilient space for dwellers,” according to Mass Save.

The goal is to eliminate up to 80% of energy consumption.

“Everything we do on the construction side is state of the art when it comes to reducing carbon footprint and energy consumption,” Fox said, adding that passive house standards “sweeping the construction industry globally”.

At a hearing on the proposal last year, the Planning Board ordered the developer to submit its final lighting plans for review and to plant a new tree, or make payment in lieu of planting, for any removal of a tree over 20 inches.

The project is still in the process of raising capital and groundbreaking is scheduled for next spring. The units could be occupied by the end of 2024.

Brian Steele can be contacted at [email protected]

Canada Post launches ‘postal banking’ with loans of up to $30,000 – National